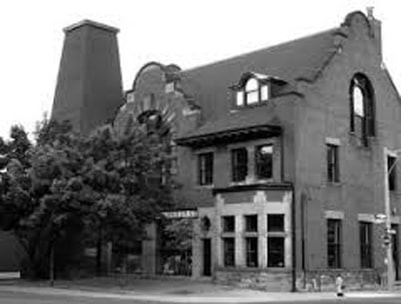 Alumnae Theatre Company is dedicated to the production of adventurous theatre not readily seen elsewhere and to skill development of women in theatre. We seek to be reflective of the diversity of Toronto on our stage and in our organization.

The Alumnae Theatre has been run by women for over 100 years, a notable accomplishment in a field traditionally dominated by men.

​A charitable organization that produces engaging and thought-provoking theatre, the Alumnae continues to thrive because of its diverse, enthusiastic, and fun group of women volunteers. We invite women with a passion for theatre to join our membership! The company is based in a beautiful converted firehall at Berkeley and Adelaide Streets in Toronto, Ontario (Canada). The space contains 2 theatres, a rehearsal space, a workshop, and a large wardrobe department. The Alumnae produces a full season each year consisting of 3 productions on the Mainstage and, in the Studio space, 2 festivals of new work, Fireworks and New Ideas Festival.

We're a club that consists of a membership of women volunteers who participate in all elements of the running the theatre: acting, directing, writing, administration, artistic programming, and management. Membership is open to all women.
For more information, please visit: Membership
During its 100 years of continuous production, the Alumnae Theatre has retained its original focus – to produce unusual plays of the past and present not readily seen elsewhere. The Alumnae has always been honoured for its challenging and unusual repertoire. ​​

“They are the pace-setters,” said Nathan Cohen in the early 60s, “for the entire Toronto theatrical community.” In 1995, Richard Ouzounian said, “The Alumnae Theatre... provides us with some of the best surprises in town: straightforward productions of excellent plays that no one else in the city seems to be doing.” Over the years the Alumnae has offered many outstanding works from the world’s dramatic literature, as well as original Canadian plays, and has achieved special recognition for its dramatized biographies, readings and literary collages.

Some of the club’s more recent “firsts” include The Art of Dining by Tina Howe, The Love of the Nightingale by Timberlake Wertenbaker, and Thirteen Hands by Carol Shields.

No longer affiliated with the University, Alumnae’s membership has broadened to include the whole spectrum of Toronto’s communities. But it continues its original mandate to present the best in classic and contemporary plays and provide opportunities for all women in theatre. Over the years, many Canadian theatre artists have honed their skills on our stages, including Martin Hunter, R. H. Thomson, Molly Thom, Drew Carnwath, Shirley Barrie, Kelly Thornton, Mallory Gilbert, Sue Miner and Richard Easton.

For the first 30 years of its history, The University Alumnae Dramatic Club (as it was originally known) performed on the stage of Hart House Theatre. Starting in 1957, the club had a series of its own homes – a coach house on Huntley Street, a garage on Bedford Road, a converted synagogue on Cecil Street, and a church on Maplewood Avenue.

The present home of the Alumnae Theatre, old Firehall No. 4, is an historic Toronto landmark built in 1900 on Berkeley Street. This handsome building was renovated and restored by the Alumnae in 1972, and contains a fully-equipped Mainstage theatre, an intimate Studio theatre, as well as workshop, a well-stocked wardrobe, rehearsal, backstage, lobby space and a benign ghost.
2017-2018 100th Anniversary Celebration:
The Alumnae Theatre celebrated its centenary 2017/18 season, with a Gala Special Event:
100th Anniversary celebrations
​Alumnae Theatre also celebrated its 100th Birthday by holding an Open House in September 2018,
featuring scenes from plays & demonstrations.
Our 100th Birthday Photos & News

Alumnae Theatre in Media:
NATIONAL POST:
How the women of Toronto’s Alumnae Theatre Company have upheld their century-old purpose in the face of constant change >

GLOBE AND MAIL:
Walking Toronto in the Footsteps of Ron Thom >

Alumnae Theatre History Project:
Do you have a story to share about Alumnae? Photos, programmes, memories?
Information or anecdotes about theatre in Toronto during the 1900's?
​If so please contact:
Catherine Spence